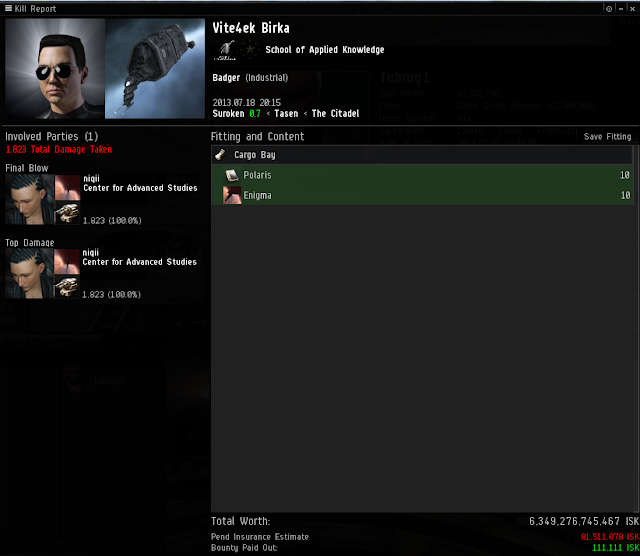 A character in an NPC corporation has fallen victim to a Goonswarm suicide ganking alt. However, this measly untanked Badger was carrying no ordinary cargo. He wasn't even carrying PLEX. He was instead carrying a batch of ten ships that until this gank were only flyable by CCP. The ships and the accompanying skillbooks are estimated to be worth trillions, most of which is likely to go into Goonswarm's wallet.

It was a quiet day along the Dodixe-Jita trade route. The Iteron Mark Vs were merrily going about their business, the Marmitive Collective's numerous gangs were keeping carebears away, and some Mackinaws were hapilly chipping away at some veldspar. But something disturbed this. Vite4ek Birka's untanked Badger jumped into Suroken, and its priceless cargohold was spotted by niqii. Mr. Birka was completely oblivious to the fate that awaited his Badger, as he was autopiloting. It's not quite known how he came to be in possession of the ships in the first place. Although efforts have been made to find out how he did acquire these ships, killmail searches have been fruitless and the man himself speaks too little English to communicate anything.

The Tornado destroyed that Badger in one shot, and niqii's alt was able to scoop the loot without incident. He then logged onto his Goonswarm main, who having been in the organisation for 5 years is quite high ranking, being just short of a director. According to The Mittani's announcement on his site, niqii generously offered to donate 9 Enigmas and 9 skillbooks. He had kept one for person use, and said that the paradoxical conundrum of Polaris requiring Polaris V to train did not hinder him, as it seems to have been listed as a requirement rather than being coded as one.

The leader of Goonswarm went on to say they would be selling Enigmas at 2 trillion isk and the Polaris skillbook at 3 trillion. The price seems to be justified given their rarity and the fact that they are actually relatively powerful ships. CCP have said they will not interfere in the affair for an unknown reason, which could increase the number of prospective buyers who were worried they would be stripped of their purchases. Should all the loot be sold, the CFC will be granted a windfall of 45 trillion isk, which far eclipses the donations received by Test. This will be enough money to reimburse around 25,000 Rokh losses at current rates, but there's no telling whether all the money will be used on payouts in the Fountain war.

BoodaBooda has taken the news better than the residents of highsec. He said "We've had a lot of luck thanks to CCP in the past, so the CFC deserves some luck too. It's just a shame they haven't got it yet. This 'fortunate drop' will only distract them from the war and make them too rich to care about fighting. Meanwhile it will motivate the average infuriated Test line member to show up to more fleets. This will be the turning point in the war.

Although The Mittani himself did not mention what they would be spending the isk on, many Goonswarm seniors have been dropping very strong hints they will be burning Highsec. There has also been a strange rise in the price of security tags; one trader said on Twitter their 340 tags had been bought by an hour old alt named "Jimmy Bee". Speculation has suggested the CFC will hire The Retirement Club and Black Legion to deal with the remainder of Delve's defensive force. Commentators have said increasing reimbursements would be a good idea, as well as giving away carriers to every character that can fly one.

For now, Goons seem most interested in filling the forums with smug. It will be a short while before the impact can be seen in space, and how many people it will enrage. The only thing known for certain is that The Mittani has been laughing for the past 98 minutes at the killmail alone.
Posted by Tubrug1 at 23:00