The opening weekend of the 11th Alliance Tournament saw a lot of action and hundreds of explosions. Those that go onto win the Alliance Tournament become revered and admired in Eve society, and even those who actually compete gain respect amongst its players. One of these competitors, Scrutt5, has become a role model for carebears trying to PVP, and his usage of 200mm Reinforced Steel Plates on a Bhaalgorn has been imitated many times since the match on Saturday. 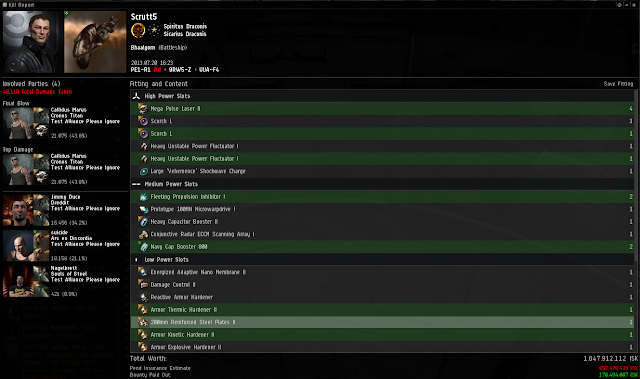 This new way of thinking has gone down well with members of the incursioning community. Gideon Tyler, executor of a reputable incursioning alliance, recently treated his members to a '200mm roam'. The FC himself was flying a Vindicator with six 200mm Reinforced Steel Plates II, which went down in seconds to three gate camping Tornados. He took the loss relatively well, saying it was in the spirit of the 200mm roam. A bystander named Key Dett commented in local "Damn they need to nerf incursions, you silly fucks have more isk than you know what to do with."

Many people believe that in terms of combat practicality, 200mm plates are far superior to their 1600mm cousins. One EFT warrior told me that although they gave 4000 less armour hitpoints than 1600mm Rolled Tungsten plates, they have less mass and therefore make the ship go faster. He commented that with a microwarpdrive running the difference in speed would be a massive 7m/s, which to an EFT warrior makes a world of difference. They also take up less powergrid, meaning that it is easier to fit a full rack of them to a ship, as some people have been doing.

There were other inspiring losses in the first round of matches, such as the Goonswarm Federation Incursus with but two blasters and nothing else equipped. Allegedly said frigate also had no ammo, was was restricted to trying to stay alive for as long as possible. It looked like this fit had been copied straight from Brave Newbies' doctrine, and was in common use before the Tournament rather than after it.

Other popular set-ups included Mildly Sober's battle industrial team. Unlike the other two fits, this one wasn't intentional and was thrown together because they didn't have enough people to field an actual team. This one has caught on particularly well with new players; one miner reported six Badger Mark IIs and four Iteron Vs surrounded his Retriever and tried to execute it, managing to bring it down to half its shields by using five Magnetic Field Stabilisers on each ship.

This weekend's action has bought about a lot of interesting kills, bringing about new trends that will last until next Tuesday. It's hoped that things will get even more interesting towards the end of the tournament when things begin to heat up and fits get increasingly exotic. We may even start seeing recent innovations such as BattleSkiffs, thanks to their now hugely buffed EHP reservoirs.

In other Alliance Tournament related news, Test Alliance Please Ignore have internally announced that they will be fielding 12 Blackbirds in their match against Late Night Alliance on Saturday, citing financial difficulties as the reason behind it.
Posted by Tubrug1 at 18:30