In the wake of an increased number of incidents involving players hauling PLEX around highsec and even lowsec, CCP have annouced that they will be adding a dedicated bay to all T1 and T2 industrials which will only accept PLEX. The hold will be 5m3 in size, allowing for 500 PLEXes to be carried at a time.

The mechanics of this new bay will be slightly different to cargoholds and other speciality bays. The key difference between them is the drop mechanics when the ship is destroyed. Regular drop mechanics dictate that a stack of items or module will have around a 50% chance of living on in the wreck of the ship after death. However with PLEXes in the PLEX bay, this figure is just 10%, meaning that only 1 in 10 stacks of PLEX will live on after their host's destruction.

This news has been greeted warmly by many highsec haulers who wish to ferry PLEX around the Eve universe. Most of them firmly believe that now their precious cargo has less of a chance of dropping, gankers will find it less attractive to gank them and therefore they will be more safe than they would be when carrying nothing. Skeptics of the move do not share this view and would still term anyone who carries PLEX a dumbfuck.

However it has produced a mixed reaction from the highsec ganking community. Some of them are worried that they will now see their income margins slashed when ganking haulers, as there will now have to be a minimum of 2 PLEX in a ship for it to be worth suiciding their Tornados. On the other hand, many more people are likely to be brave enough to carry multiple PLEX around with them, and it should therefore more likely that a PLEX carrying ship will be encountered. We asked one experienced Industrial killer to sum the change up for us. He said "Ever since I've been ganking in 2009, PLEX carrying incidents have been on the rise. Back when I started, PLEX kills only came at a rate of 50 regular ganks, similar to the rate of faction rat spawns in asteroid belts, but today every tenth hauler I scan has got at least one PLEX in it. If we had let this continue at its natural rate, within a couple of years PLEX would be as common in Iterons as ammo is in ships, but CCP had to go and ruin it for everyone."

Of course the biggest winner in this is CCP. Every time a PLEX is lost in space, it can't be redeemed for a subscription and therefore they profit. This kill alone allowed them to rake in thousands of real life Icelandic Kronas, and the annual figure from lost PLEX is probably enough to pay an employees salary. Some players have speculated that CCP have purely done this to pay several employees they have recently hired. One of these tinfoil speculators told me "Every time someone undocks PLEX from Jita, an alarm goes off at CCP HQ, and CCP generate a Tornado character(s) to gank the PLEXer. Then they shoot the wreck to make sure noone gets the PLEX."

CCP Minchip has also hinted on the official Dust forums that the Dust 514 team are working on implementing the ability to transfer PLEX from Eve characters to Dust characters. She said 1 PLEX would be able to be equipped in a soldier's midslot, and although it would not serve any practical function it would be visually noticeable to other characters as a 'badge' on the wearer's head. She also included a helpful image of what this would look like. Upon the character's first death in a game, the PLEX will be destroyed and no longer visible to other players. 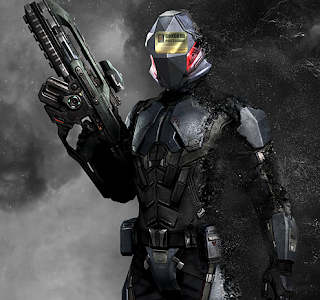