Research by professional tearologists has pointed to the conclusion that the ongoing CFC hellcamp of 0-W778 is angering large numbers of players. The report also highlighted that a disturbing number of people believe The Mittani acquired his place of resident through real money transfer, and that he also consistently purchases chicken from KFC using the same method of income.

Many of these tears can be seen on the comments sections of Eve News 24 articles, and are generally more illegible and poorly thought out than the posts themselves. This will give you some idea of how bad the situation is. Several comments theoretisied that if everyone stopped visiting Eve's premier news site themittani.com the leader of the CFC would be forced to abdicate. EN24 commenter and N3 member 'Robo' was particularly anguished at the hellcamp, posting this:

Appropriately named 'Subhuman' gave his theory on why the State of the Goonion was not held on Valentine's Day, inferring Mittani was cheating on his wife with his dog:

"Mittens was too busy with his ... what teh fuck is his dogs breed anyway looks like someone took a real dog and shrank it so he wouldnt feel so inadequate .. date last night"

Many third-party spectators grew worried that the game was being destroyed by the so-called 'miatttani'. One of these people were concerned that corporations in N3 renter corps would be forced to go back to lowsec or highsec, apparently unaware of the fact that both the Russian block and the CFC have renter alliances of their own:

"So its been stated that you don't want to ruin the FUN of the game, yet by destroying a large coalition that is N3 you wipe out all their rental corps which without living behind the banner of N3 would never get to experience nullsec for a majority of them.... But meh it is what it is and the freedom of EVE and the nature of man will always produce some form of Dictator that tries to make their claim in the universe and everyone else just rolls along with it."

erratic1212 displayed his erratic behaviour and noted that despite the fact that the CFC declared war months ago, they 'hasn't done shit', despite playing a large role in the largest battle in Eve's history, pondering the question 'how do you dec war when you're already in one?' He concluded these observations by saying "Just more dork ass mittins spewing propaganda."

The same man popped up again multiple times in the thread to deliver his valued opinion on the present situation.

"Mitsuck is the biggest shit on this game there is. It would be so much better without him and his cry babie goonturds.Remember all the crying they did after they tried to crash the node and it backfired?"

While of the Grrrr Goons crowd speculated The Mittani RMTed using his alliances income, erratic believes he makes money for his alliance the other way round - by using ad revenue from themittani.com to give to his alliance. Apparently this would make the CFC completely destitute if everyone chose to boycott the website.

"Yep, funny how all the suck in the game gathers to take out far lesser forces, cries like little girls when they get spanked, and think they've accomplished something when they win.It truly is pathetic.

But, hey, Mittens has RMT from his web site, and that is what it's all about.If everyone boycotted that website, you'd see the game change dramatically."

Terrible Name revealed the truth behind the CFC - they're actually led by a combination of Hitler, Darth Sideous and Richard III.

"The problem is people like you don't 'get' goons. They play the fucking Imperial March before Mittens delivers his speech. Goons revel in pretending to be an evil empire lead by Hitler. Its a massive joke for them. Goons dont take this game seriously, and they understand Mittens plays a self aggrandizing propaganda machine spinning narratives like a tornado and they love him for it. Mittens is basically playing Richard the 3rd in space. "

"Don't see mittens camping with you eh, grinding in bombers?... Oh yea he wouldn't waste his time doing that, he doesn't need to logg in ever, his lackeys serve their purpose once more.
TMC is a tool for the modern day version of Nazi Germany, you have Mittens as your Dictator, milking income into his wallet while doctrinating the majority of cfc in censored propaganda devout of anything more than half truths at best/ lies at least."

He was backed up by one of his bad-posting kin.

"The truth will out. Think on this goon peons ratting yourself into an early grave .. IF Mittens was not involved in RMT, how could he afford to live in NY AND give up his job. 1.5 cent clicky adverts? I think not."

Apparently ratting poses some kind of health hazard and can result in you dying early because The Mittani is involved in RMT. 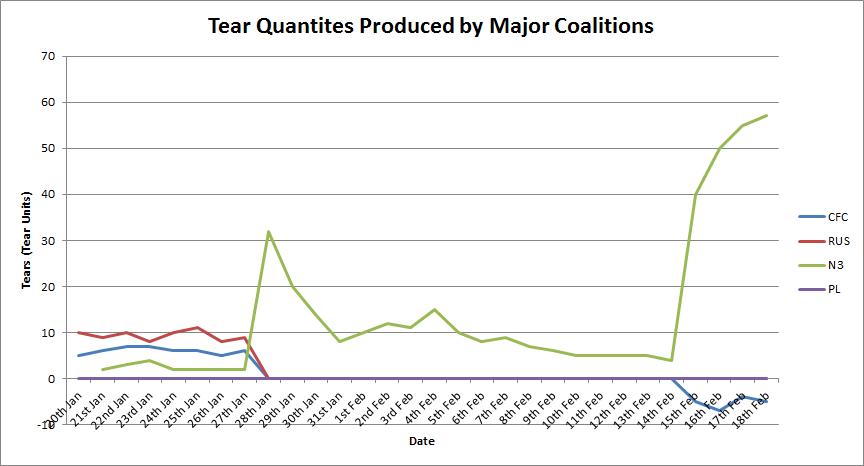 The Tear Research and Investigation Unit put their findings together to produce this graph. We asked leading tearologist Dr. Endie to explain these results to us.


"We can clearly see some disturbing evidence that N3 have become extremely sad after this event, building on the already dangerous levels of discontent that we saw following B-R5RB. These emotions could continue to increase over the next few days; at around 100 Tear Units (TU) we'll begin to see people get so angry they quit their corp, at 150TU the more enraged members will begin to incoherently spam characters in local like highsec miners, then towards 200TU we'll see people ragequit the game and biomass their characters. We've seen some negative TU readings from the CFC, indicating tears of joy and/or happiness, while PL have continued to be chill throughout the month."

It's only a matter of time before the 0-W778 station is flooded with tears of its trapped residents, causing people to drown and die. With the number of respectable arguments made by members of N3, pressure is growing on The Mittani to put a stop to this atrocity.

Acknowledging that EVE is basically a game for nerds that love spreadsheets, CCP has boldly decided just to hand out copies of Microsoft Excel for their next expansion. Since most of you are in fact nerds and do in fact love Excel, an extra free copy of Microsoft’s popular virginity retainment software will likely be a big hit with fans. Here’s the official, and might I add delicately worded, press release:

“Listen, nerds, don’t deny how much you love numbers, math, and masturbating so we’re gonna phone this one in and give you a free license to Microsoft Excel. We both know you go a big veiny one for spreadsheets so don’t even bother to flame us. And while we’re at it, next up on the product roadmap is in-game integration with RussianMailOrderBrides.com (do we know our demographic or WHAT?). Also we’re introducing a ‘Plex for Pizza’ program where Dominos will deliver a hot cheesy circle of garbage straight to your door in exchange for a PLEX. All it takes is the click of the Dominos icon in your Station Services panel.

Of course, once we roll this out to nullsec all the big alliances will drive the price of PLEX down to try to just defeat their enemies by coaxing them into a food coma. We’re all about the meta game here at CCP.”

What follows is pure editorialization on the author’s behalf, which I realize is highly unorthodox for the Eveion which has never posted an untrue thing in its entire history, but I think this move is a game changer. I, for one, can’t even remember the username and password to my PVP toons. I get home from work, pop open a Zima, and roll out multiple Planetary Interaction spreadsheets across my three massive monitors. I then (also did I mention I am naked from the waist down for this part?) marvel on how if I squeeze out 3 more Nanites from Jita IV per day I can make one extra Wetware Mainframe 13 months from now! Haha, take that CCP: I just fucking won EVE.
Posted by Unknown at 17:43 No comments: