Eve to be Merged With WoW

Blizzard and CCP have announced a partnership that will involve the merging of Eve, Dust 514, and Bliizard's flagship product World of Warcraft. It appears that although this joint game will be developed by both companies, CCP and Blizzard will not join to become a new corporate entity. The merger is due to take place around December 2013, suiting Eve and WoW's natural expansion cycle.

The mechanics were detailed quite thoroughly on Blizzard's website, and although some of them will not affect either of the games, some of them will completely revolutionise them. Firstly, a new planet will be added in Jita called Azeroth. This is where the WoW characters will be stationed regardless of their level. However, the Jita Azeroth will only contain the highest population realm, with the second largest realm being housed in the Azeroth in the Perimeter system, the third in Urlen, the fourth in Amarr and so on until all realms will have their own version of Azeroth in 983 of Eve's systems. There will also be 983 versions of Outland, but this time the least popular realm will have its Outland in Jita, and so on.

On any one of these 983 versions of Azeroth, a level 90 World of Warcraft character will be able to board a rocket and fly into a station in the planet's orbit. Once there, they will be free to purchase a new space mount using gold. The entirety of the Eve Universe will become the level 90-95 zone that players who wish to grind to the new level cap will visit, with the main areas of space being separated by the level of the new NPCs (more below) that will inhabit them. Empire space will be used by characters who are level 90-91, nullsec by people that are level 92-93, and finally wormhole space is level 94-95.

The WoW characters will be able to fly a spaceship mount (resembling a shuttle) to locations where specific quest givers are. These new quest givers will either be situated in Data Centres that already exist within highsec, or they will be added as agents in space in lowsec, nullsec and wormhole space. 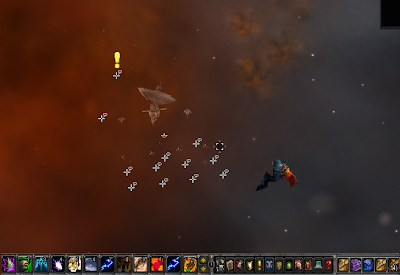 The quests that these agents give will be similar in format to the ones that already exist in WoW, and will feature tasks that involve killing ships, collecting items and going to different places, with gold and experience being rewarded as is the current system now. It seems that PVE will involve attacking several new types of primitive alien species which will attack an unprotected WoW player when they enter an asteroid belt, but will leave Eve players alone. Eve ships won't be able to attack WoW characters directly with weapons, but will be able to ram them to death, or fry them if they get too close to the engines.

The Dust integration comes into play in the PVP aspect of the expansion, where 20v20 teams consisting of both mercs and WoW players will fight on one of Eve's many planets. It's not quite clear how this will be balanced due to WoW players having hundreds of times more health than Dust mercs,  some change would be necessary to prevent an even larger fail cascade of Dust players. At the end of the round, honour points will be given to players which can be redeemed at a station in Rancer. These points can be used to purchase monocules for WoW characters, or traditional WoW equipment for Dust characters.

Eve players will now be able to enter the atmosphere of an Azeroth and shoot people on the planet, regardless of their race or level. Thanks to the speed and power of ships, a handful of frigates will be able to ravage an entire continent. A new 'local channel' will also be added to ensure that the WoW players can communicate their frustration to their space comrades. It has also been speculated that the planet collision models won't be fixed, and players will be able to drive massive ships through a capital city which will kill everyone inside.

The backstory will tell the saga by saying the 983 versions of Azeroth were pulled from a parallel universe, and ended up in the same galaxy. The Eve factions descended onto all of these Azeroths and gave them the knowledge of space flight, allowing them to construct rockets and 'breathe' in space, thus allowing them to move around without a ship. The primitive NPC 'monsters' are said to have followed their low-IQ prey to New Eden by utilising portals developed by tracing the scent of the character's locations. Although Eve's NPC factions are amicable towards the WoW world due to its cuteness, capsuleers do not feel the same way and Concord allows them to persecute them at their will.

Thanks to the relatively low impact on the Eve universe and the opportunities it offers Eve players, some capsuleers are in favour of the move. One said "I can't wait to find some WoW fucks ratting in belts, I'm going to stick my Phantasm's spikes so far up their arse they'll be permadeathed." Another commented "Can't wait to see those inbred bastards whine about being dragged from Stormwind to the centre of the planet by a Leviathan."

Dust players generally agreed that if the stats stayed the same- and they most likely will- they would get one-shotted by every single character, and the game would be dominated by WoW players. It looks like the new battlegrounds will only be a change in scenery for WoW players, despite having the same mechanics as Dust matches do now. The WoW members themselves say they're looking forward to the next expansion as much as any other one, and they can't wait to throw their money at Blizzard even if they don't have a reason to do so.